Welcome to Holliday Grainger Fan, your best source for everything on Holliday Grainger. You may know her best for her role as Lucrezia Borgia on the Showtime show 'The Borgias', even though you may have seen her in corsets a lot her most recent projects have left that out! This site aims to update you with all the latest news on Holly's career. Enjoy your stay and hopefully came back! For any question or doubt e-mail us here
written by admin on February 29, 2016

WHILST the upcoming BBC One drama, Lady Chatterley’s Lover, is set to get pulses racing, Holliday Grainger says the titillating novel isn’t quite on the same level as E.L James’ Fifty Shades of Grey. 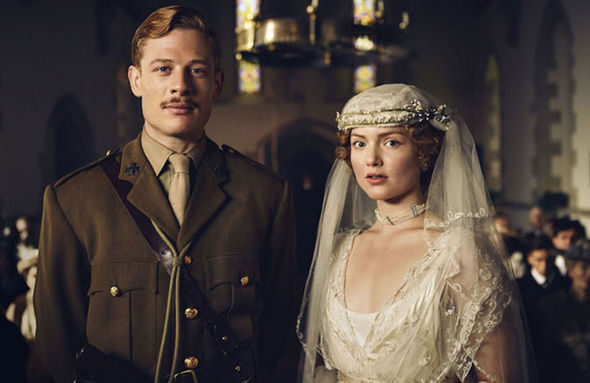 This Sunday, BBC One will be showing a modern incarnation of DH Lawrence’s infamously sexual novel which follows an aristocratic woman’s affair with a lowly gamekeeper, performed by Game of Throne’s Richard Madden.The original Lady Chatterley’s Lover by DH Lawrence was banned in Britain for over 30 years for its graphic sex scenes and obscene language, so there’s no wonder we are all waiting to see how far the BBC will go with their new adaptation.
But the new drama’s leading lady, 27-year-old Holliday, is less than impressed with the novel’s erotic reputation in comparison to modern S&M novels.“All I knew was that it was a really steamy, racy read and my grandparents had always said that the copy was well thumbed in libraries, and one particular middle central page!” said the actress who shot to fame in The Borgias.

“But as a modern reader, post-Fifty Shades Of Grey, I was like, ‘Oh, I don’t see what all the fuss is about!”Whilst the BBC seemed to hint at some explicit scenes with a bare-chested Richard in the trailer, he has insisted that the incarnation of the 1928 novel is mainly focusing on “the emotions of the characters”.The hunky Scottish actor has also refused to get some tips from his former Game of Thrones co-star, by watching the BBC’s 1993 version that Sean Bean starred in.

At the time many viewers complained that BBC’s earlier remake of the “racy read” in 1993 had an excessive amount of full frontal nudity.

The director of the new version of Lady Chatterley’s Lover, Jed Mercurio, has similarly played down that his adaptation will be pornographic.

“There’s sex and passion in it, but we’re not going to shock people like the book did,” he said