Welcome to Holliday Grainger Fan, your best source for everything on Holliday Grainger. You may know her best for her role as Lucrezia Borgia on the Showtime show 'The Borgias', even though you may have seen her in corsets a lot her most recent projects have left that out! This site aims to update you with all the latest news on Holly's career. Enjoy your stay and hopefully came back! For any question or doubt e-mail us here
written by admin on August 09, 2022

And August is the lucky month in 2022 as Holliday made an official appearance to promote The Capture Season 2 (soon to be) release! She attended a photocall alongside co-stars Daisy Waterstone, Indira Varma, Tessa Wong, Ben Miles and  Joseph Arkley as well as members of the crew Ben Chanan, Rosie Alison, James Kent and Chris Corrigan. We added 31 pictures of Holly beautyfully wearing a dress and shoes she previously wore here and here, which we have added to Holly’s Closet for future reference as well.

As we previously announced via Twitter, Holly and Harry welcomed twins to the world! And we couldn’t be more thrilled! Enjoy exclusive photos of both of them caught by the paparazzi in Devon while going out with the twins. And how cool is that their car is super Strike inspired? 😉

Thank you to our friends at The Tottenham for telling us not one, not two, but three items Holly is wearing in this candids! It’s so rare to find her own clothes that we are thrilled just by that new information on her closet! She has a Seraphine 3 in 1 Mid-Weight Maternity Parka, Dr Martens Vegan 2976 Chelsea Boots and a Sea Salt jute bag.

Note: We do not intend to show the twins off, it’s part of their personal life, and as fans, we know that both Holly and Harry are very private about their personal life. Let’s keep it like that! 🙂
written by admin on December 03, 2020

We have finally re-launched Holly’s closet! Previously, we had a voting on our twitter page to determinate which name to call this section, and the fans voted and decided the new name! Previously called Dress like Holly, this section shows you what Holliday has worn through the years. We don’t have much information but everything we do it’s available on the link: 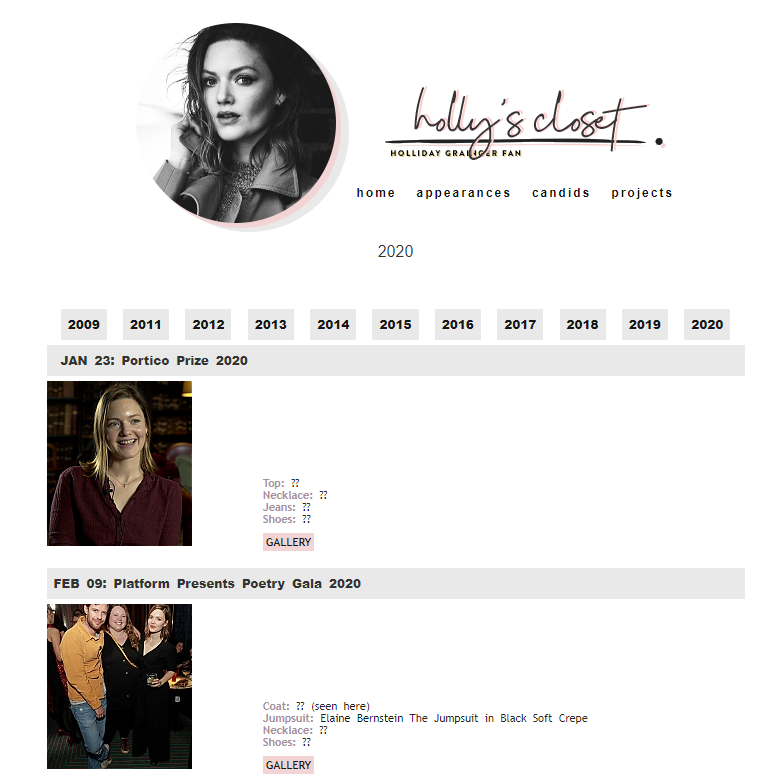 “THE CAPTURE” PHOTOCALL AT THE SOHO HOTEL

Holly attended a new event alongside Callum Turner and Ben Miles. We have previously seen this outfit while on TIFF 2019 (here and here). We can’t figure out where the blouse is from but the culottes are Peter Pilotto navy wide-leg matte satin. Enjoy the pictures from The Capture first photocall!

World Premiere of ‘My Cousin Rachel’ at Picturehouse Central

As we previously said, Holly attended ‘My Cousin Rachel’ world premiere! She wore a wonderful dress with a sheer top and Rupert Sanderson pumps:

See several links to video interviews from the premiere here:

Finally after all this days collecting and organizing Holly photos on BAFTAS, we have over 150 pictures to share of the event!