Welcome to Holliday Grainger Fan, your best source for everything on Holliday Grainger. You may know her best for her role as Lucrezia Borgia on the Showtime show 'The Borgias', even though you may have seen her in corsets a lot her most recent projects have left that out! This site aims to update you with all the latest news on Holly's career. Enjoy your stay and hopefully came back! For any question or doubt e-mail us here
written by admin on January 26, 2016

HOLLYWOOD—Holliday Grainger was destined for a career in show business. Her parents named her after legendary jazz singer Billie Holiday, adding an extra “l” for flourish.

“My parents were on the way to the registry office, and realized they had to come up with a name,” the British born actress recounts. “It was going to be Billie or Mollie. They were like, ‘Mollie sounds like Holliday, so let’s go with Holliday.’” 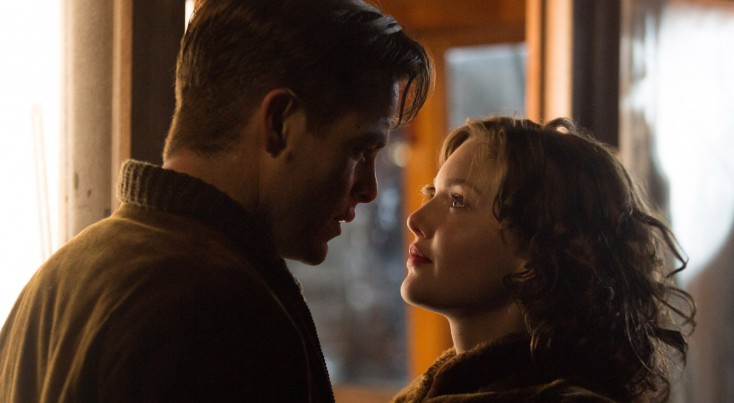 Grainger got her start early, but it was in acting, rather than singing, that she has made her mark. At age six, she was cast in a BBC comedy drama “All Quiet on the Preston Front.” Other roles followed, but she didn’t get an agent until she was 12. The hazel-eyed beauty has a classic beauty, reminiscent of legendary Hollywood actress Gene Tierney. Her classic look and remarkable acting skills have landed her roles in several notable productions, most notably Lucrezia Borgia in the acclaimed Showtime series “The Borgias.” She also appeared in Mike Newell’s adaptation of “Great Expectations.” More recently, she played one of the vain stepsisters in Kenneth Branagh’s “Cinderella.”

The 27-year-old now plays Miriam, a feisty New England telephone operator who steals the heart of Chris Pine’s Coast Guard coxswain in Disney’s “The Finest Hours.” While the main story centers on a daring rescue off the Massachusetts coast in the 1952, it’s the romance between Miriam and Boatswain Mate First Class Bernie Webber that keeps the action adventure afloat. As Miriam, Grainger plays against the anxious fiancée waiting for her man to return from sea stereotype. She’s proactive, gutsy and unafraid to stand up to Bernie’s boss (played by “Hulk” star Eric Bana). Miriam determinedly waits with the rest of the Coast Guardsmen at the station for the rescue team to return with survivors of a capsized oil tanker. The film, directed by Craig Gillespie (“Lars and the Real Girl”) also stars Casey Affleck, Ben Foster and John Ortiz.

Grainger spoke about playing Miriam, who (spoiler alert) never doubted her beau would return safe and sound, having miraculously navigated a small boat out to the wreck site and delivering all the survivors ashore during a February blizzard.

Q: Did you have to do a lot of research to play the part of the real Miriam Webber?

Grainger: About the time I signed on, I got a chance to spend some time in Chatham, Massachusetts, where I met with (Miriam and Bernie’s daughter) Patty, who was just so lovely. Miriam was quite a private person, and Patty wanted to respect that. Patty was open and told me bits about where the stories in the script came from—what was true and what happened and what the real events were and how they were similar. Miriam’s granddaughter (Lea) wrote a lot of poetry about her “Grammy,” and she sent a few of those poems to me. It was really kind of a way to integrate the family and show how much love there was. From what I could tell, Miriam was a strong matriarch of the family but super warm. She definitely wore the trousers but was very loving and giving.

Q: Miriam is kind of a thankless role on paper—the woman who is back on shore while this rescue operation is going on. But you managed to carve out a plot for yourself. She gets stuck on the road and demands to be heard. Was that something you picked up from the real Miriam as well?

Grainger: Craig Gillespie (the director) was really instrumental. I was so thankful when I spoke with him. We were totally on the same page. You see so many action movies where it’s a guy’s world, and the women characters are not so fleshed out. It’s so boring to watch, let alone to be. Craig really wanted her to be a human being, to be the heart of the story, to be the reason Bernie wants to come home. That was even more important for me to get a sense of who she was, so I could flesh her out into being a real person.

Q: How much of Miriam and Bernie’s story in the movie is true? Did she really propose marriage to him?

Grainger: A lot about their relationship was true. They did meet over the phone. She overheard a conversation with Bernie at the call center she worked at. So they started this phone relationship for four months before they even met. That’s true. They fell in love over the phone, and she was the one who pursued marriage. I don’t know if she was the one who actually proposed (to Bernie), but that scene in the car, where she wouldn’t get out until they were engaged, may have happened.

Q: Do you think it’s appropriate for a woman to propose marriage to a man?

Grainger: It depends on the culture and the guy. It still feels like it’s a very romantic thing for a guy to do, so maybe (a woman proposing) would detract from that. But actually, if you’re both into it, it doesn’t really matter who does the asking, does it?

Q: There are some scenes in “The Finest Hours” where you’re outside in the blizzard, and you don’t have a coat on. Was it cold while you were filming in Massachusetts?

Grainger: It was freezing! What I found out the other day, which I found ridiculous, there was this one shot when Miriam gets out of the car without her coat. Apparently, they showed this to a test audience and the audience thought I didn’t look like I was cold enough. They didn’t believe it. So they ended up taking that shot out of the movie, but I really was freezing. (She laughs.)

Q: Can you talk a bit about the dancing scene with Chris Pine. Did you rehearse a lot?

Grainger: We actually rehearsed loads. It was very closely choreographed. The choreographers were amazing. Craig had this idea that of the dance being like movements of waves and a ship. Bernie would be leading Miriam like he’s in charge of the ship. There was this beautiful dance floor they created and we spent days and days learning. Then comes the day (when we are shooting the scene) and all you really want is for it to be done.

Q: How did you find your Chatham accent?

Grainger: We had a voice coach, who was a little like Katharine Hepburn to begin with. And that was more characterization than accent. Her accent was different, more educated. The week that I went out to rehearse, I went driving around Chatham, to the local pubs to try and record someone. But it turns out that Chatham now is a quite well-to-do town, so there really isn’t any rural Massachusetts accent like there was in the 1950s. So it didn’t work. I ended up recording Valley girl-sounding girls. (She laughs.)

Q: What makes a great hero and who are some of yours?

Grainger: There’s something about Bernie that is the epitome of a hero. If you listen to the real Bernie (on old interview recordings), he sounds so humble. Bravery comes from having fear but getting over it. It’s like an old-school sense of masculinity within the guys in (this movie). It’s not just the strong morals and values that you stick to, but that integrity of person. There’s something quite simple about honesty and integrity and sticking to that. Nowadays that can be clouded by some false idea of masculinity that’s not real.

As for my heroes, I have heroes for different things, I suppose. Anyone that is successful but stays true to themselves like Cate Blanchett and Meryl Streep are my heroes. These are people that are polite and a joy to be around and hone their craft amazingly well.

Q: You’ve done a lot of period pieces like “The Borgias” and the TV miniseries “Bonnie & Clyde.” Do you find yourself attracted to these roles?

Grainger: It’s not something I think about. It’s not something that would be my focus. My focus is more about the script as a whole. Who would I be working with? Do they inspire me? Do I believe the character? Do I think there’s something different that I could show? But then, maybe I am subconsciously attracted to different periods because it is more interesting. You get to learn a little about history, and you get to learn different cultures and different mindsets.